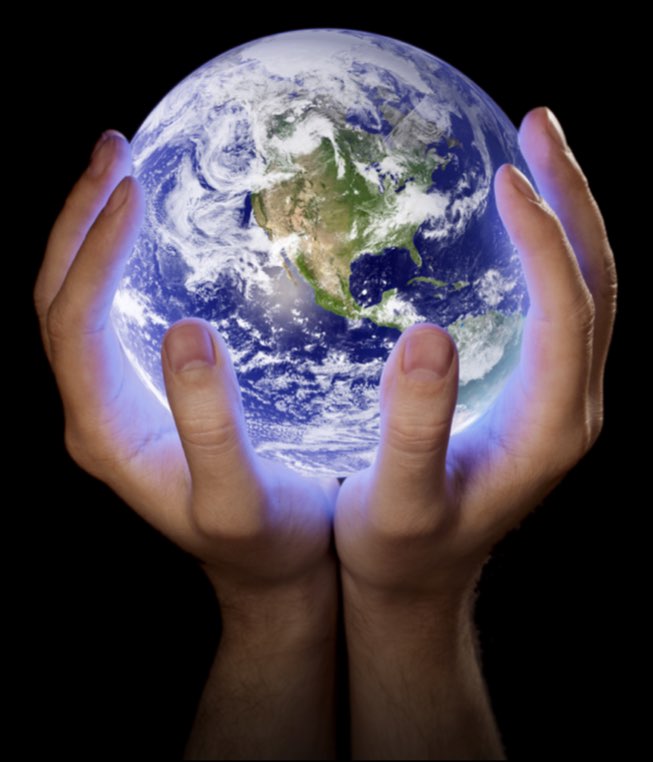 CAN WE REACH HUMANITY'S DESTINATION?

The Expandiverse Starts the ESG Personal Solutions Stage of History

Our problems are now too big for governments, corporations, international organizations and philanthropies. That means we need to reach a new stage of history where the world can solve its biggest problems.

A new kind of option is Everybody RISE's "system change" platform. This grows an ESG Personal Solutions Economy where everyone could improve their life and help solve our biggest problems — and do it in years instead of generations.

Can we start reaching the goal of the the 21st Century by 2025, and scale it by 2030? It is time to become a healthy, prosperous and sustainable planet that includes everyone. 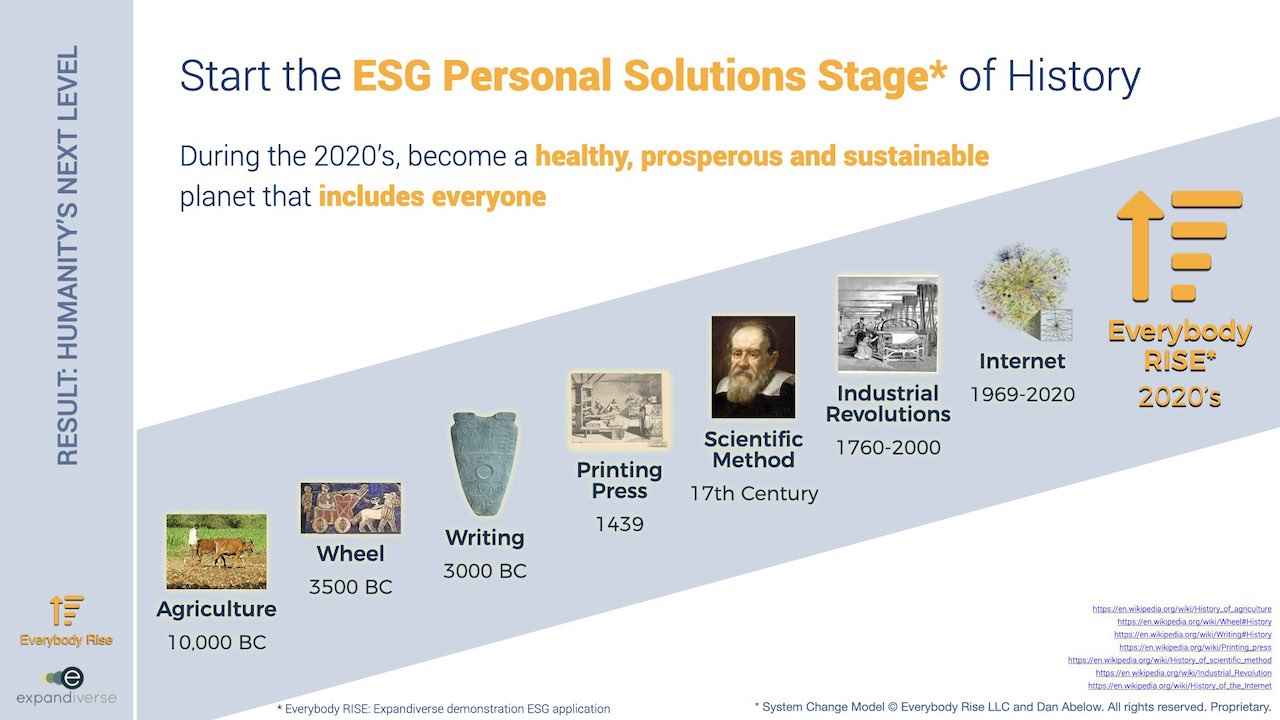 The Industrial Revolution is humanity's largest economic advance in history. It combined the rise of capitalism with the power and achievements of free individuals.

The Industrial Revolution's first "Divergence" stage started in the late 1700's and produced the first high growth nations that came to be called the Advanced Economies, or the First World.

Its second "Convergence" stage started about the 1950's when most Third World countries reached economic growth rates far above the First World economies. In many cases they could copy and apply technologies and other advances at far lower costs and speed. An example was starting with mobile phones and skipping land lines. These economies were led by the BRICS nations (the BRICS are Brazil, Russia, India, China and South Africa). By 2050 the former 5 largest "advanced economies" will all be replaced except for the United States.

Now a third "Expandiverse stage" adds its Real World Metaverse to turn the world's growth toward an exponential ESG economy by delivering personal solutions so everyone can reach their goals. Capitalism was built on mass consumption. Now mass personalization will evolve that to empower everyone individually. This historic change starts People-First Capitalism as every person takes control so that the world's best ESG solutions flow to them at low global costs, with real-time speed and digital scale.

We are in the decisive years of the Climate Crisis. As we create countless new ESG solutions, and apply trillions of dollars in capital to develop them, our biggest challenge will be distribution so billions of people switch to them every day.

We have never experienced a healthy, prosperous and sustainable planet that includes everyone. We have never known how to build this.

Now, with the Expandiverse, we can start and prove this new channel by 2023 to 2025, and scale it to billions of people by 2030. This is the time to Raise every person so they will fix the world in years, not generations. 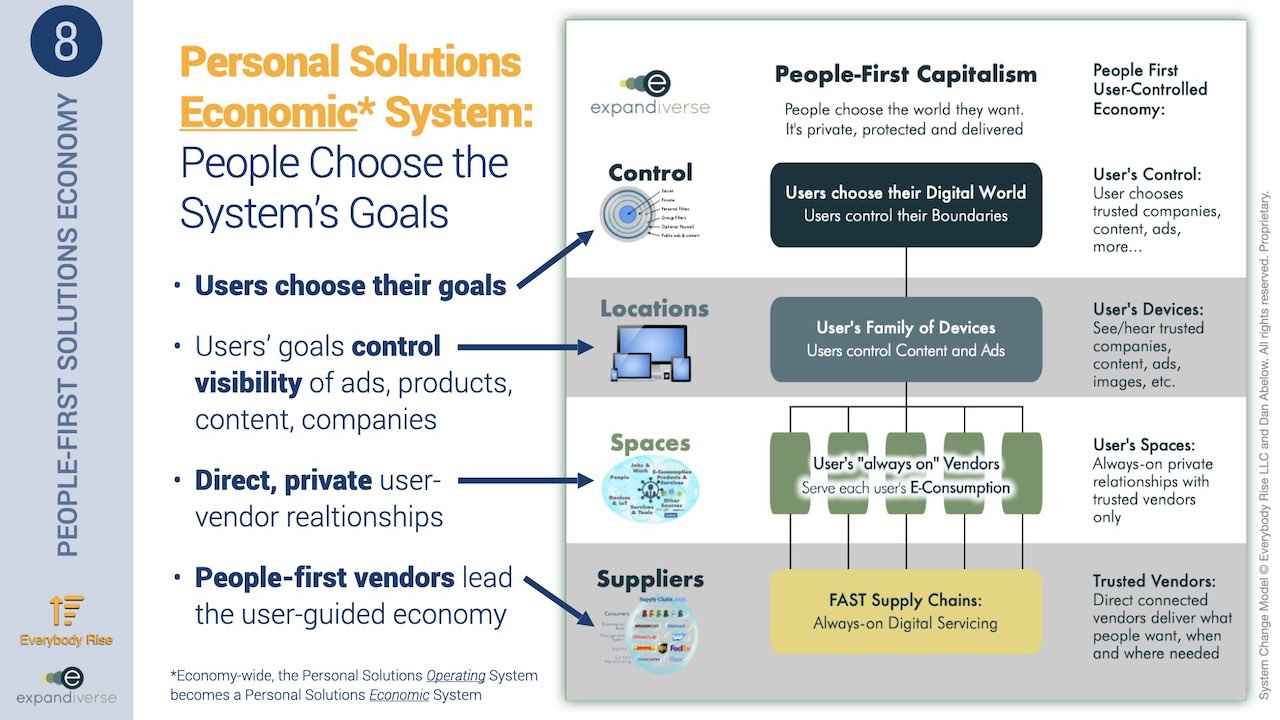 Human fulfillment and economic ESG growth will be unlocked when every person can choose their goals and the world's best available ESG solutions flow to them digitally every minute.

Doing tasks and activities on connected devices, all day long, will make every person as powerful and successful as the world's best — while they help fix the planet.

Whole new sectors of sustainable ESG businesses can serve these new markets and demand patterns as human history reaches a new stage. Every person, worldwide, will be educated and connected enough to enjoy a lifelong journey to their full human potentials.

As new ESG solutions are discovered and proved at digital speeds, the planet will rise to its full ESG potentials. Billions of people can engage in improving their lives every minute, which will help fix the world in every one of their ESG steps.

As capitalism shifts to a personal and private system, they way companies create value will be rebuilt from the perspective of individuals, the goals they choose and their ESG successes.

Today's focus on products and services will be replaced by continuously connected solutions whose measures and results are visible to each user, and whose market transformations will be a requirement for many companies. When it is clear how well each ESG solution meets our personal goals, every person will connect privately in always-on relationships with the vendors who help them improve their lives in real-time.

For the first time, we can become a universally successful ESG world where billions of people improve their lives all day long, and help fix the planet every day.

That will start when the Expandiverse's Virtual Personal Solutions Operating System delivers powerful new ways for people to run the planet in the Real World Metaverse™.

HOW TO BEGIN, HOW TO GROW

A 2-Year Work Plan and a 10-Year Growth Plan

Tech's giant platforms began as startups then scaled as they grew.

Here is Everybody RISE's 2-Year Work Plan and 10-Year Growth Plan. This uses design thinking to develop and user test proofs of concept, and prototypes. As the fit with users and markets is developed and proved, solutions can be launched and scaled digitally to grow for years and decades. 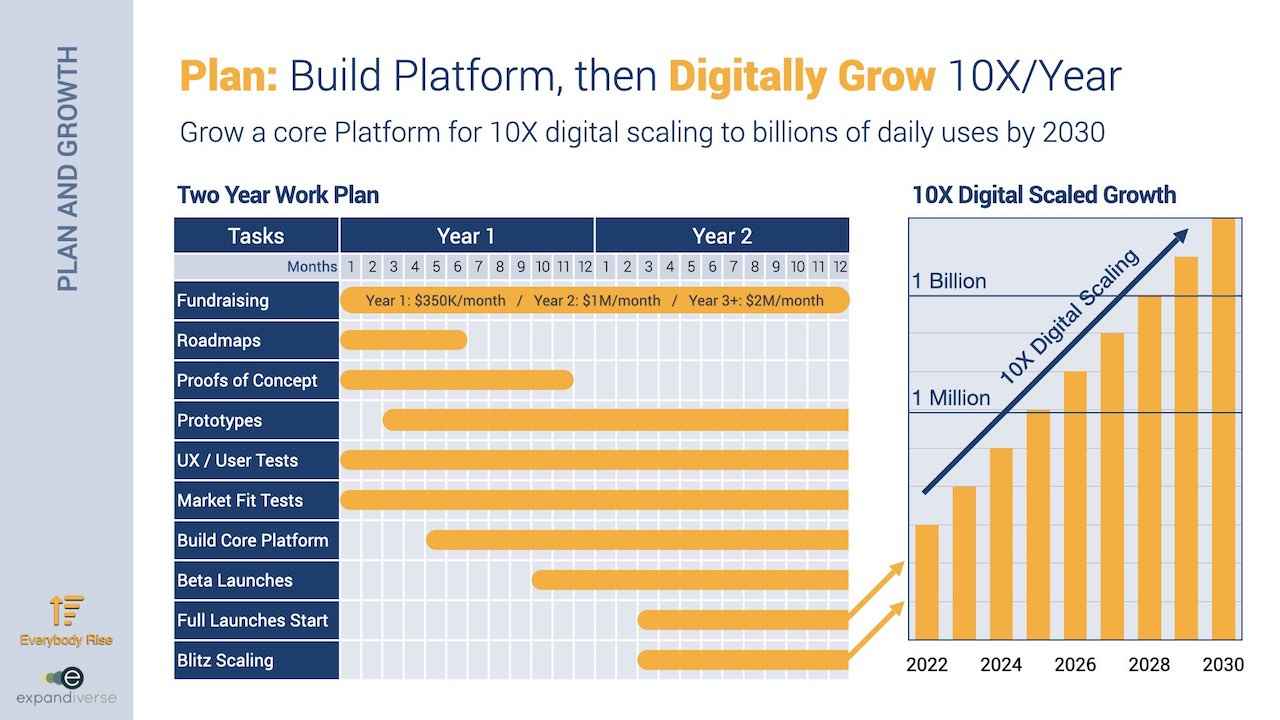 WHO DOES THIS? WHO WILL OPPOSE IT?

Everybody RISE Team and Competitors

Some of Everybody RISE's Team 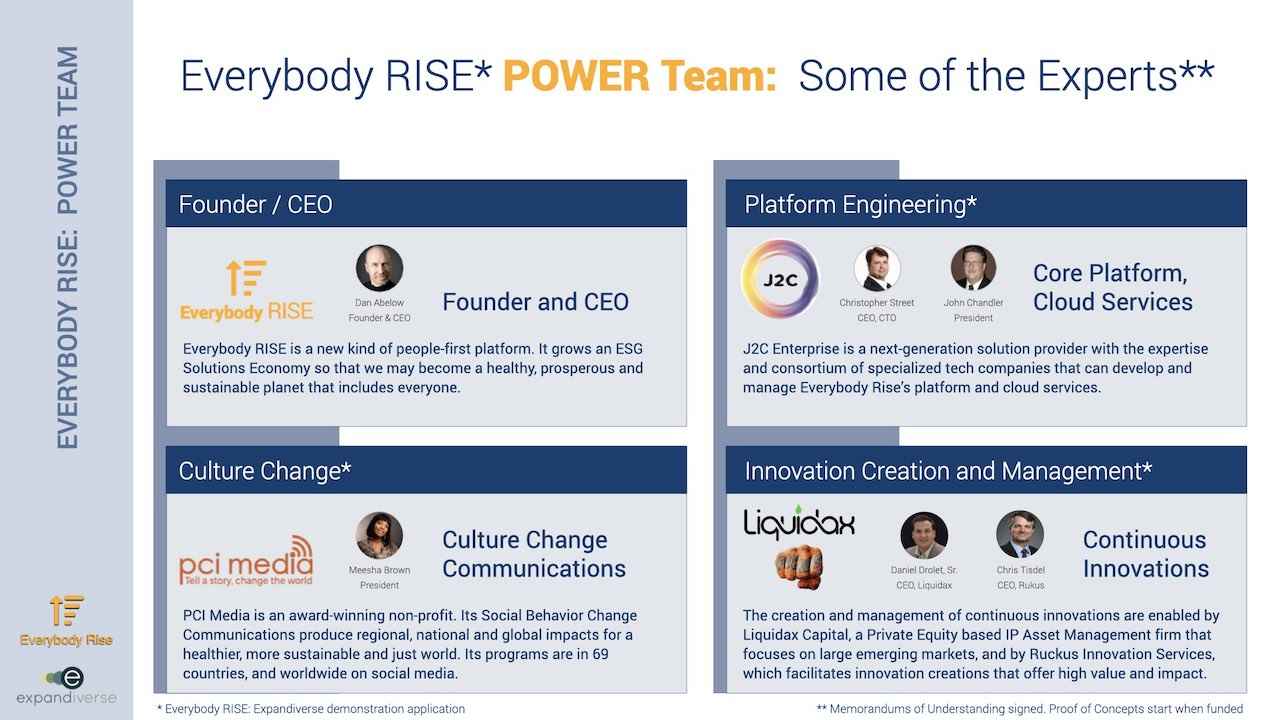 RISE is growing a power team to start an ESG Personal Solutions platform.

Everybody RISE grows by relying on experts. This new kind of people-first platform develops and leads an ESG Solutions Economy that increases health, prosperity and sustainability with ways to include everyone. Its founder’s Expandiverse Technology has been cited 1,628 times.

Some of its experts include PCI Media in culture change communications, J2C Enterprise in IT development, Ruckus Innovation in continuous innovation, and Liquidax Capital in planning and managing emerging large ESG markets. Click the Team slide for more information.

Some of Everybody RISE's Competition 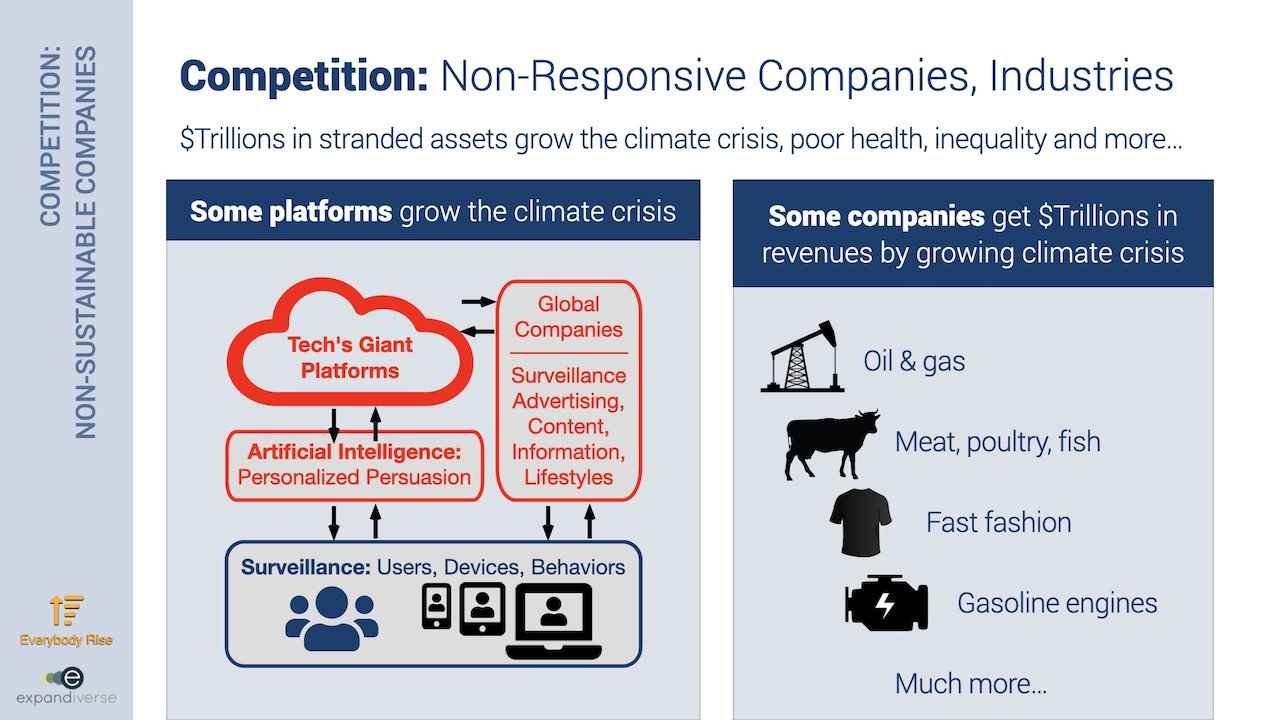 While climate disasters explode everywhere, expect most senior executives to use delays and greenwashing while they fail to make their businesses sustainable.

These Captains of Industry will continue steering their Titanic companies toward climate change's icebergs. They will grow wealthy as they sink the world.

Don't expect most of today's Captains to change course. Don't listen to the greenwashing that makes Greta Thunberg say, "No more blah, blah, blah.". Their destination is a Titanic collision with climate icebergs. Survival is not assured.

Expect these Captains to say great words and make nice speeches while they continue selling destructive products, disastrous results and delays of new solutions and technologies.

Instead, each person will need to take control and steer their life in the directions that improve themself and the world.

HOW TO DO A DIGITAL TRANSFORMATION TO A PEOPLE-FIRST PLANET

System Change Model: When People Rise They Turn the World Upward and Positive

How do we get from today's world to a world we want? This table shows how we can "change the system" by 2025, and scale an evolving system by 2030.

Each row is a large group in society or the economy.

This System Change produces new people-first leaders and winners across corporations, investors, NGO's, governments and people. This makes it clear how Everybody RISEs when the Expandiverse's "people-first system" begins. 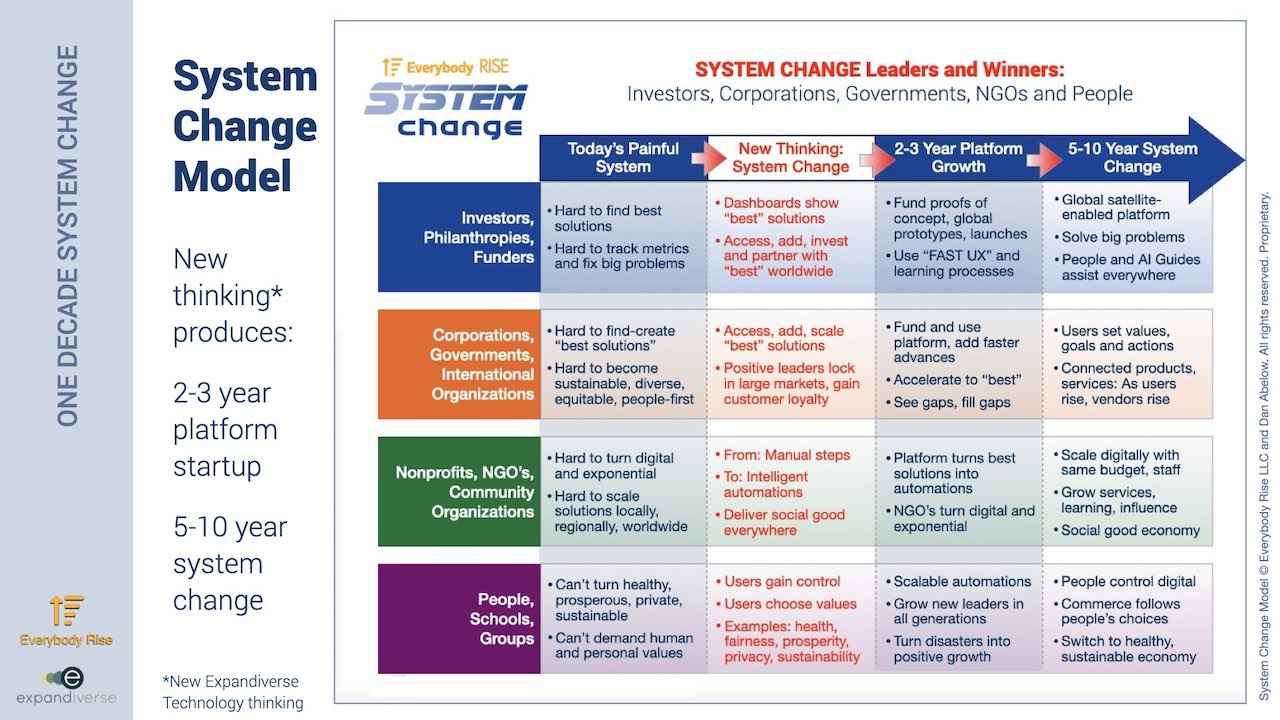 By 2025 to 2030 we could each receive humanity's combined guidance, abilities and digital resources every minute. We will start a historic stage where we can all improve our lives all day, every day.

Continuous improvement by everyone will make Online-First Life and Business much more powerful than physical reality. We will live on an online-first planet, with personal global online super powers that never existed before.

Our waking hours increasingly shifted online during these two decades:

2020: The Pandemic Shift to Online-First

The Covid-19 lockdown changed the world to Online-First. Within weeks work, life, school, shopping and entertainment were fully online. The three biggest lessons were:

The biggest competitive advantage was to see the online-first future coming, and develop those innovations and prepare. The rapid shift propelled new leaders to the top.

The 2020's will see the rise of the Satellite-Enabled Internet. When 7 billion people are connected, we will become an Online-First Planet:

Huge digital transformations have become normal every decade. Those alive in 1980 were born in a physical-only world with only a physical reality. Then each decade transformed the world more:

Welcome to 2030. A people-first world will change how everyone lives and how the "system" works. Empowered people decide their goals, and a healthier, more prosperous and sustainable digital "system" serves each of them personally. Everyone can use solutions that transform their lives and the world more every day.

A People-First World where Every Person is in Control

See the introduction to this Real World Metaverse from 2010 and 2011: Why are today's Metaverses still far behind?

Today's tech platforms design digital reality as a business model that makes them rich and directs our commercial choices. We live in the surveillance commerce system designed by Google, Facebook, Amazon and other tech giants.

Tech's business is to sell us the non-sustainable economy, and persuade us to buy it and live inside of it. That makes us help destroy the Earth so they can increase their revenues and their wealth.

Instead, the point of the Expandiverse is to help everyone live in a better world than physical reality. We have seen technology help people, organizations and the world. Now it can improve reality.

The Expandiverse shifts control to every person. You choose your goals, receive the world's best solutions and choose the ones you want. You replace today's limits with the ESG solutions you want. The economy serves you privately and directly, in a "system" named People-First Capitalism. 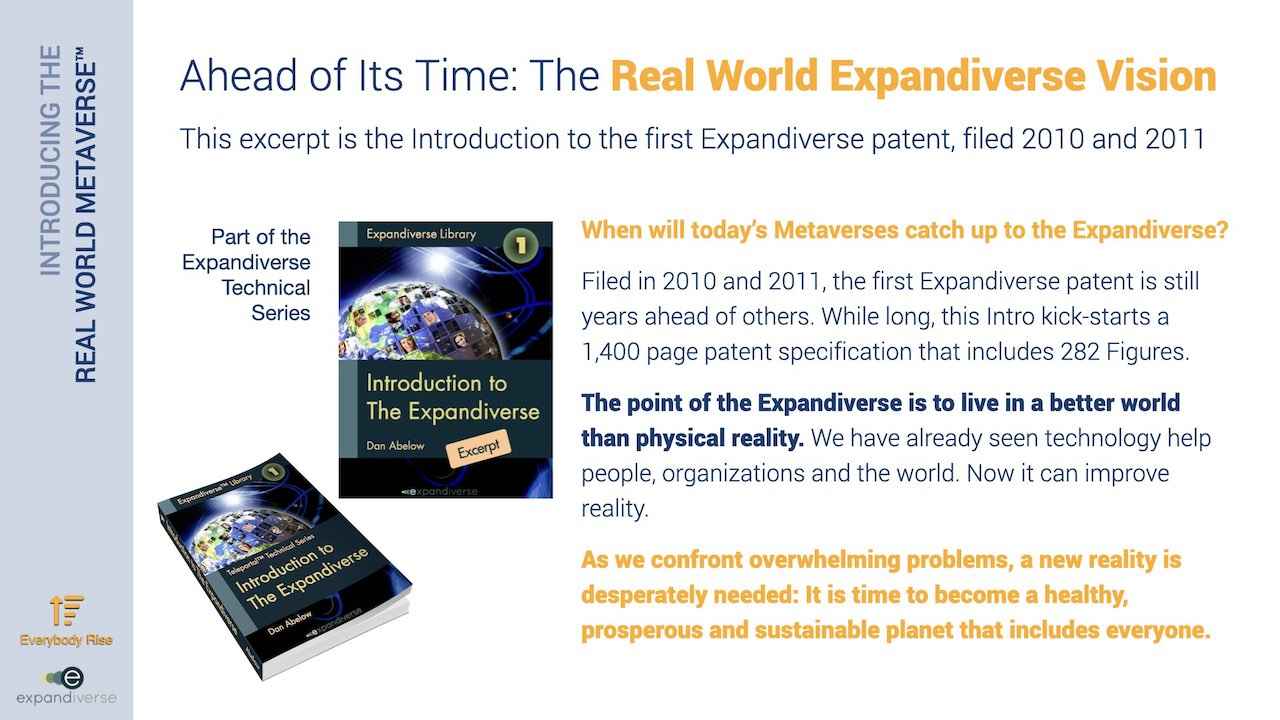 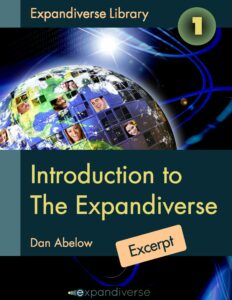 Get this PDF Excerpt Now

IS IT THE WORLD'S TURN FOR A POSITIVE DECADE AND CENTURY?

The Expandiverse Experience: Everybody RISE

Only Expandiverse Technology is people-first, designed as "system change" technology, at world scale and raises people above tech's giant platforms and monopolistic corporations.

Welcome to the Expandiverse, where people Rise to lead the world.

An Expandiverse-based platform, named Everybody Rise, could digitally scale to billions of uses every day. It could display and deliver personal ESG solutions online, increase the daily achievements of each person, and raise the world's digital acceleration to transformative levels.

Everybody RISE starts small like any startup, delivers proof of concepts and scalable prototypes, then launches its components as they gain traction. It grows through digital blitz scaling to raise each person, and the world.

Billions of people can receive and use humanity's "next best steps." Digital Wealth and exponential growth are for everyone in the Expandiverse, not just for tech's giant corporations. 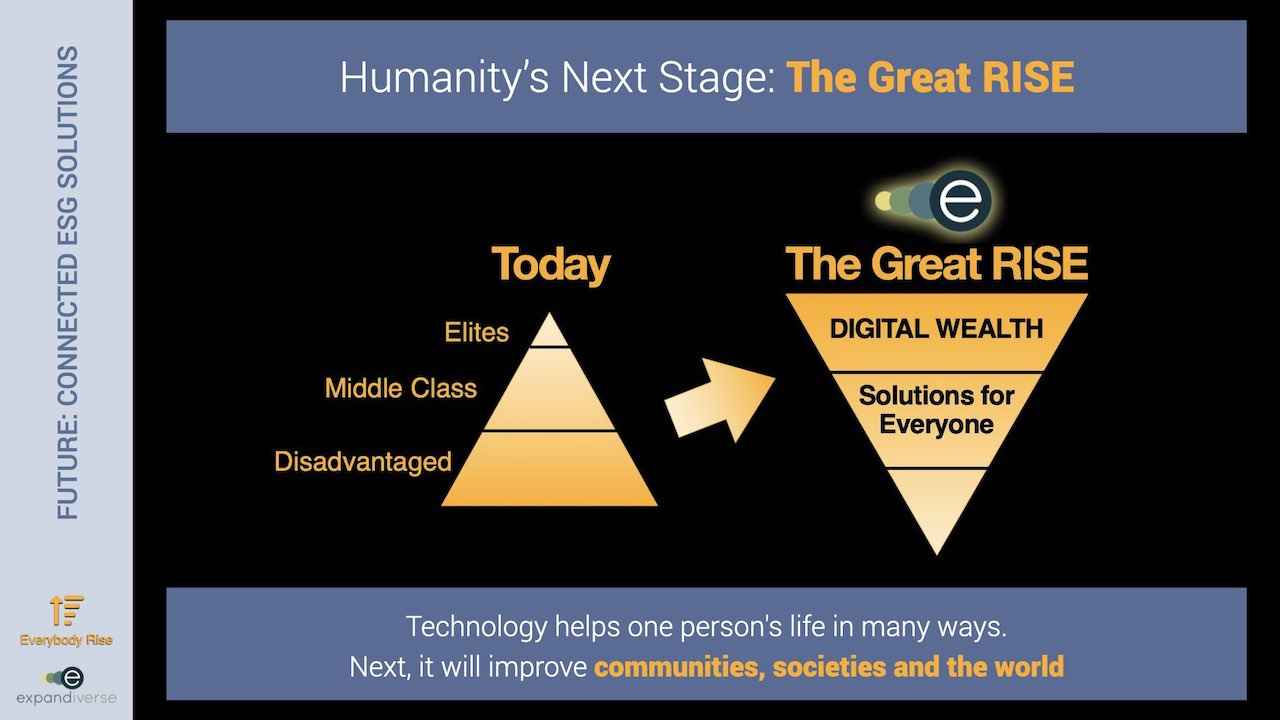 What to do if You are an Executive with Interest, Large Goals, Authority and Budget — Or an Editor who wants Articles

For services, assistance or articles contact Dan Abelow, the inventor and founder 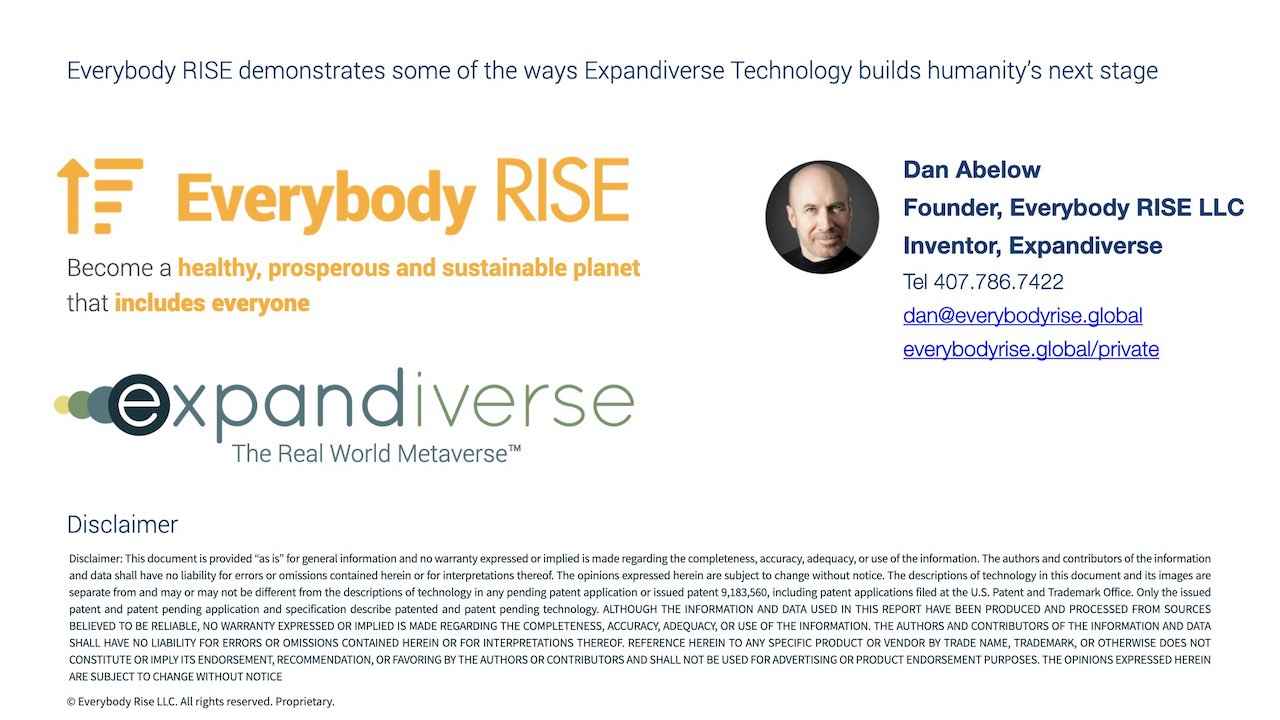 Expandiverse is new IP and services for a Real World Metaverse™ that raises each person to the top so that everyone can improve their life and direct a better world.

Everybody RISE is a new kind of platform to become a healthy, prosperous and sustainable planet that includes everyone.

For Expandiverse IP contact Liquidax for licensing, partnering or acquisition

Liquidax Capital works ahead of the change. It is a private equity based IP asset management firm that focuses on large emerging markets.

New "people-first" technology. Builds an online-first world that elevates people and empowers everyone personally. Received over 1,600 patent citations to date.

Working to transform our world of frequent emergencies to a people-first world that is healthier, sustainable and inclusive, with new ways for everyone to rise to the top.

(In private development) Add a Solutions Economy where everyone can solve big problems: Become healthy, prosperous and sustainable, and include everyone. 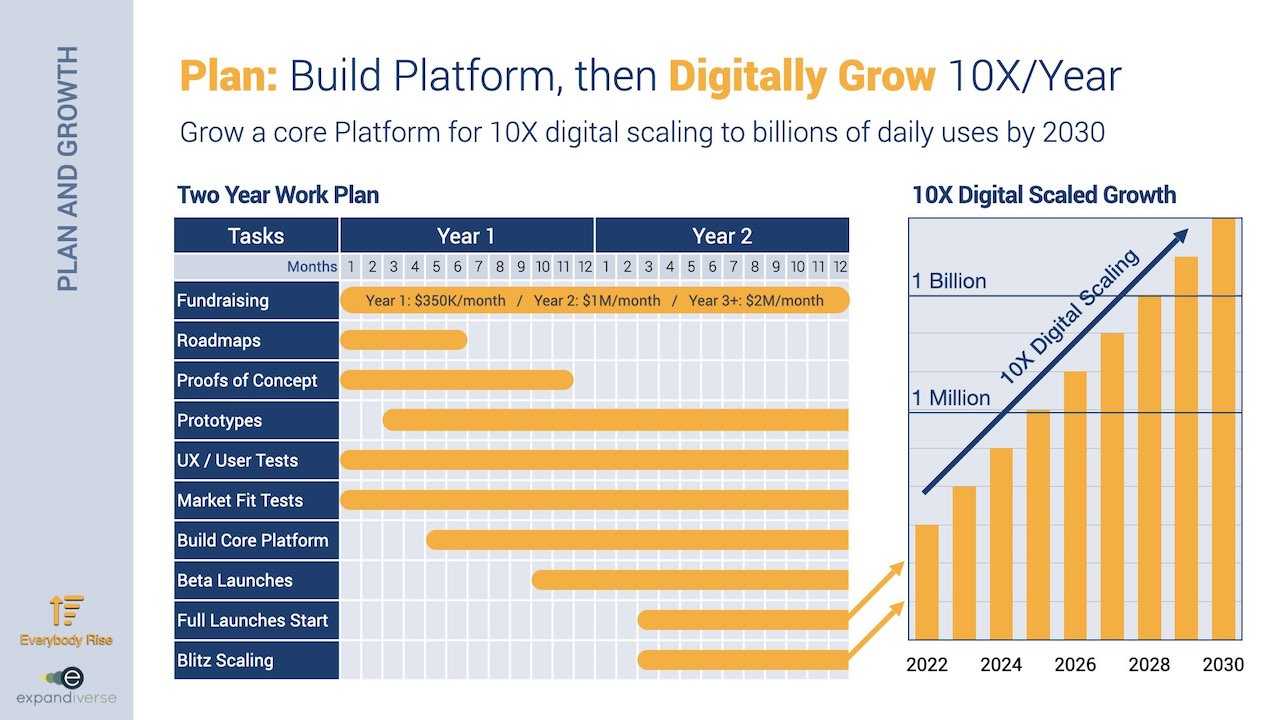